a further holiday in Datça

Lets my resting place be Datça "Burry me my chuck at Datça, Get by Ankara, get by İstanbul! They're full to the brim., Expensive to the utmost, For example at Zincirlikuyu, One grave worths 750 million, Here is relatively cheap, Even there's no possibility of being in a fix, No, no need for your pray, As I said, burry me at Datça, There, at that cemetery which has a sea-view, But I'm not gonna interfere if they dig it assuming that its a treasure define." Can YÜCEL

Datça is a district of Muğla Province in south-west Turkey, and the center town of the district. The center is situated midway through the peninsula which carries the same name as the district and the town (Datça Peninsula).

Geography
The long and narrow Datça Peninsula, whose outline follows the ondulations of small bays and coves facing south or north all along its length which reaches near 100 km (62 mi), corresponds almost exactly to Datça district area, with the addition beyond its isthmus of a small panhandle in the direction of the south-east. The isthmus itself is wide only of several hundred meters. The extreme end of the western tip of the district and the peninsula, the locality called Tekir, is the location of the ancient city of Knidos. There is an ongoing debate on whether or not this location was the original site of the ancient city, a number of sources claiming that until the mid-4th century BCE, Knidos was halfway along the peninsula, near the present-day district center.[1] The peninsula's eastern end is marked by the fjord-like indentation of Bencik Cove, 1.5 km in length, at the end of which the narrow isthmus where it joins the mainland is found. This point is a natural curiosity which offers a wide view of theGulf of Gökova in the north and the Gulf of Hisarönü in the south and is called Balıkaşıran (literally, the place where fish may leap across) and is also often used for the portage of small boats.[2]

Settlement
Both the town and the peninsula were called Reşadiye [3] for a brief period in the beginning of the 20th century, in honor of the penultimate Ottoman Sultan Mehmed V Reşad, and some maps may still refer to the peninsula under this name. Today, Reşadiye is the name of one of the quarters of the town along with Eski Datça (literally "Old Datça") and İskele ("the quay") quarters, each separated from the others by a distance of about a mile to form, taken as a whole, the town of Datça proper. Reşadiye quarter was the original administrative core was located when the town was renamed Datça and turned into a district center in 1928, before it was moved to İskele quarter. The center town is crossed by the short course of the Datça Stream (Datça Çayı in Turkish).

Datça has nine villages scattered along the peninsula. These are; Cumalı, Emecik, Hızırşah, Karaköy, Kızlan, Mesudiye, Sındı, Yakaköy, Yazıköy. Historically, apart from small coastal patches, Datça Peninsula has two fertile areas along its length. The whole of the eastern half is bare, mountainous and scarcely inhabited. The western part is also mountainous, rising in places over 1,000 meters, but has towards its western end on the south side a considerable extent of well-watered land reaching to the coast at Palamutbükü locality and supporting a group of villages known collectively as Betçe (the five villages). These are; Mesudiye, Sındı, Yakaköy, Yazıköy, Cumalı. The village of Mesudiye, very near the sea shore has a jetty owned by the community of villagers. The village's bay is called Hayıtbükü. Palamutbükülocality, more to the west, also has a little pier which allows boats to moore. Palamutbükü today is a holiday village with a long beach.[4]

The second and larger area of good land is in the middle of the peninsula southwest of the median isthmus dividing the two halves and centered around the town of Datça. The region's promising potential was noted already in the 1880s by the hydrographer Thomas Abel B. Spratt in the following terms:

The plain and valley of Datça is very fertile, having fine groves of olive and valonia, and of almonds and other fruit trees, with abundance of water, if properly utilized.[5]
A point of note on the general settlement pattern of these villages is that the locations chosen were never in the immediate coastline, but always at a mile's distance or more from the sea and at a relatively safe altitude on the slopes of a hill. The reason was from times immemorial was the fear of pirates, advantaged as they were by the intricate geology of shores of southwestern Turkey and of the many islands and islets that are its natural extensions, in an environment not unlike that of the Caribbean Sea. Piracy remained a serious security problem well until the beginning of the 20th century and especially during the weakening of the Ottoman Empire and the issue often necessitated foreign intervention.

Tourism
Datça Peninsula is a prized location for tourists visiting Turkey, especially by sea, because of the beauty of its many coves and larger bays, which are favored ports of call for those undertaking the celebrated Blue Cruise along Turkey's spectacular southwest coast. Boats (usually gulets) depart either from Bodrum or Marmaris, or from Datça itself for these tours.
The road from Marmaris to Datça may still be a little bumpy in some parts, and winds along a fauna that gradually but strikingly differs from that of the mainland.
Apart from the traditional settlements, there are also a dozen recently constructed vacation villages in the peninsula. The balance between preserving the natural way of life and fauna and investing in large-scale infrastructures for the tourism industry is a vividly ongoing debate for Datça, as for the entire region of southwestern Turkey. The inhabitants of the Datça peninsula have shown themselves clearly opposed to gigantism and are in favor of developing the tourism potential of the region through family pensions and inns and small hotels well integrated into their environment, while governments in the past displayed approaches to the debate in mere foreign exchange entry terms.

Notable natives
In Turkish literature, Datça is associated with the poet and the accomplished translator (notably of Shakespeare) Can Yücel who spent the last decades of his life in Datça and is also buried here.

Footnotes
1. According to Herodotus, during the Persian invasions in 540 BC, the Knidians had sought to dig a canal at this spot as a defensive measure and in order to transform their territory into an island. But an oracle was consulted who reportedly said "If the gods had so willed, they would have made your land an island. Do not pierce the isthmus." Whereupon they surrendered to the Persians.
2. Not to be confused with the town of Reşadiye in central-northern Anatolia along the valley of the Kelkit River.
3. With the very high number of the bays and coves ornamenting Turkey's southwestern coastal straits, it is not uncommon for one of these to be spontaneously named after a certain person who could have had a connection to the locality of a temporary or a permanent sort. These names often evolve without the direct involvement of the person concerned. For example, the former "Bencik cove" before arriving in Datça is now widely known as "Emel Sayın cove" (Emel Sayın koyu) simply because she had found the place beautiful and had stopped there to give a short concert to those present. Similarly, "Bardakçı cove" in Bodrum is also called "Zeki Müren cove" (Zeki Müren koyu).
4. Thomas Abel Brimage Spratt (1886). Remarks on the Dorian Peninsula and Gulf, with Notes on a Temple of Latona there. Archaeologia, 49:345-365, London. 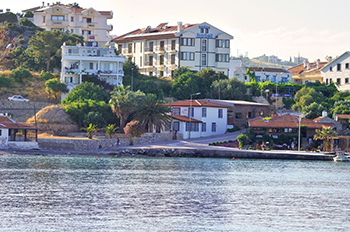 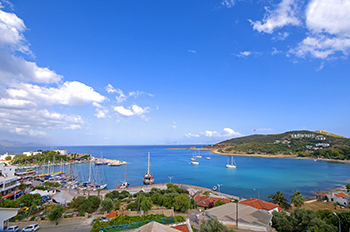 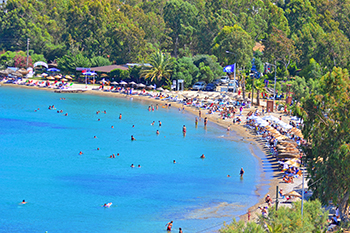